This case study presents the modeling of the tobramycin pharmacokinetics, and the determination of a priori dosing regimens in patients with various degrees of renal function impairment. It takes advantage of the integrated use of Datxplore for data visualization, Mlxplore for model exploration, Monolix for parameter estimation and Simulx for simulations and best dosing regimen determination.

The case study is presented in 5 sequential parts, that we recommend to read in order:

In this part, we would like to explore the influence of the parameters of a 2-compartment model. From the Monolix GUI, where we have selected a (V,k,k12,k21) model from the PK library, we have clicked on the blue icon to open Mlxplore. In the pop-up window, we can choose which individual we would like to simulate. We choose individual 69, which has only a few doses administrated, and modify the time grid to 0:0.1:200 as shown below: 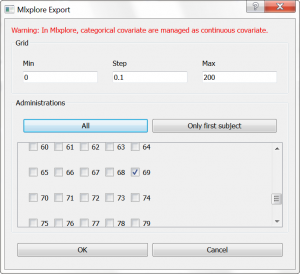 In the Mlxplore application that has opened, a script has been automatically generated to define the simulation to run. The script contains information about:

This script is editable, but let’s first run it as is, by clicking the blue arrow run button. The simulation is displayed. One sees the 4 administrations of different doses, and the non-linearity during the elimination phase. Using the sliders on the left, one can observe the influence of the parameter values on the simulation. Clicking the “Add reference” button permits to freeze a curve to better compare. 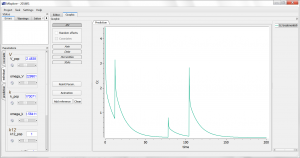 As having several doses is not very convenient, we can go back to the editor tab and modify the [ADMINISTRATION] subsection to

such that only one dose at time 10 and of amount 100 is administrated. We also modify the time grid to

and run the model again. For instance, the influence of reducing the value of k21 (dark curve versus light curve) can well be understood: 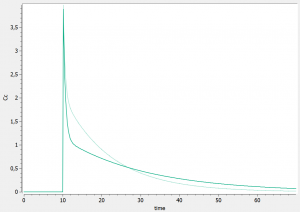 One can also go to the “covariate” tab on the left, and play with the covariate values to see their impact on the simulation.

To change percentile levels, colors, labels, scales, etc look into the various menu tabs. To change the sliders limits, click on the sprocket.

Next part: Simulations for individualized dosing with Simulx and Monolix