The purpose of this case study is the exploration of a tumor growth inhibition model for low-grade glioma treated with chemotherapy or radiotherapy. The model has been published in Ribba et al. in Clinical Cancer Research (18(18); 5071–80). The research goal is to describe the tumor size evolution in patients treated with chemotherapy or radiotherapy, and to explore the impact of treatments on the tumor growth, along with the impact of inter-individual variability.

). Damaged quiescent cells, when re-entering the cell cycle, can repair their DNA and become proliferative once again (transition from

to P) or can die because of unrepaired damages.
The pharmacokinetics of the PCV chemotherapy is modeled using a PK/PD approach, in which drug concentration is assumed to decay according to an exponential function. In this model, the three administrated drugs were not considered separately. Rather, the authors assumed the treatment to be represented as a whole by a unique variable (C), which represents the concentration of a virtual drug encompassing the 3 chemotherapeutic components of the PCV regimen. Following Ribba et al., the model writes

Notice that, in the publication,

was assumed for identifiability reasons. The initial condition writes

A schematic view of the model proposed in Ribba et al. is represented here: 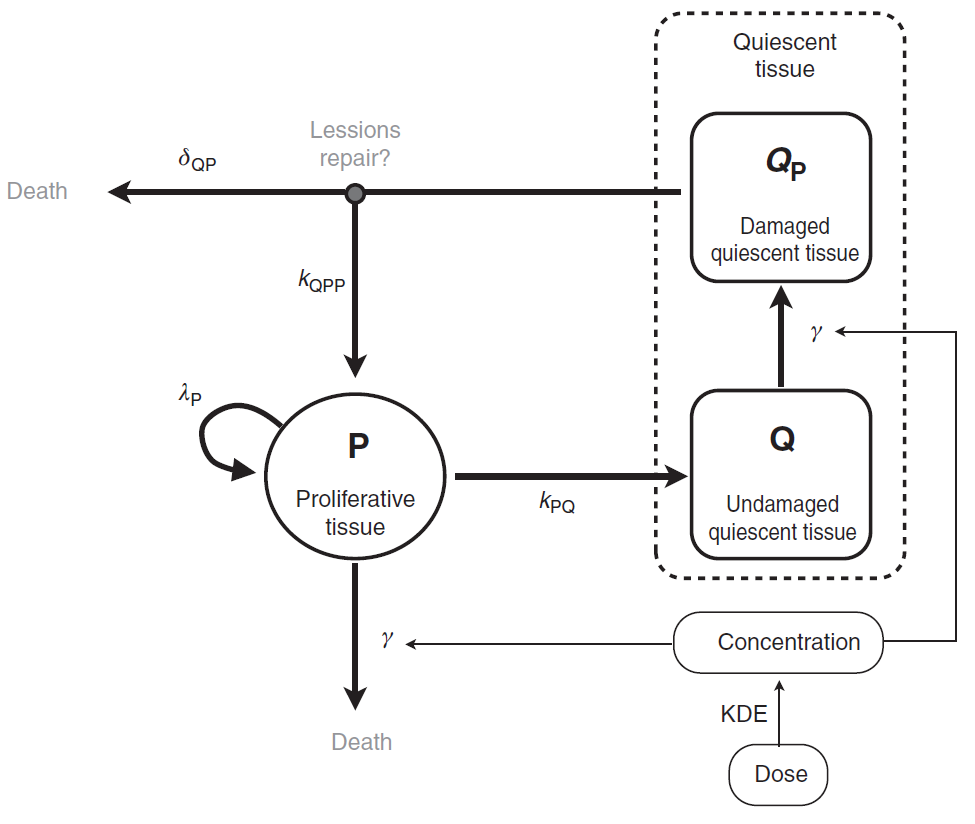 The purpose here is to define the model in Mlxtran language. The model writes as 4 ODEs. The resulting set of parameters is

. Therefore, the [LONGITUDINAL] subsection starts with

and continue it with the 4 ODEs and the definition of

The individual parameters corresponding to the 8 population parameters (6 parameters and 2 initial conditions) were assumed to be log normally distributed across individuals. Therefore, we have to define an [INDIVIDUAL] subsection as follows:

The model is then the sum of all these codes and is implemented in TumorGrowthInhibitionModel_mlxt.txt

To define the project, we must define the model (in the <MODEL> section, as done in the previous paragraph), all parameter values (for the *_pop and omega_*, in the <PARAMETER> section) and the output (name and time grid, in the <OUTPUT> section). To explore the model, we define in the section  <DESIGN> three administrations where we vary the inter dose timing and keep the same annual amount.

Finally, a section is added to define the graphic we want to look at. Then, the project is implemented in TumorGrowthModel_mlxplore.txt as follows: 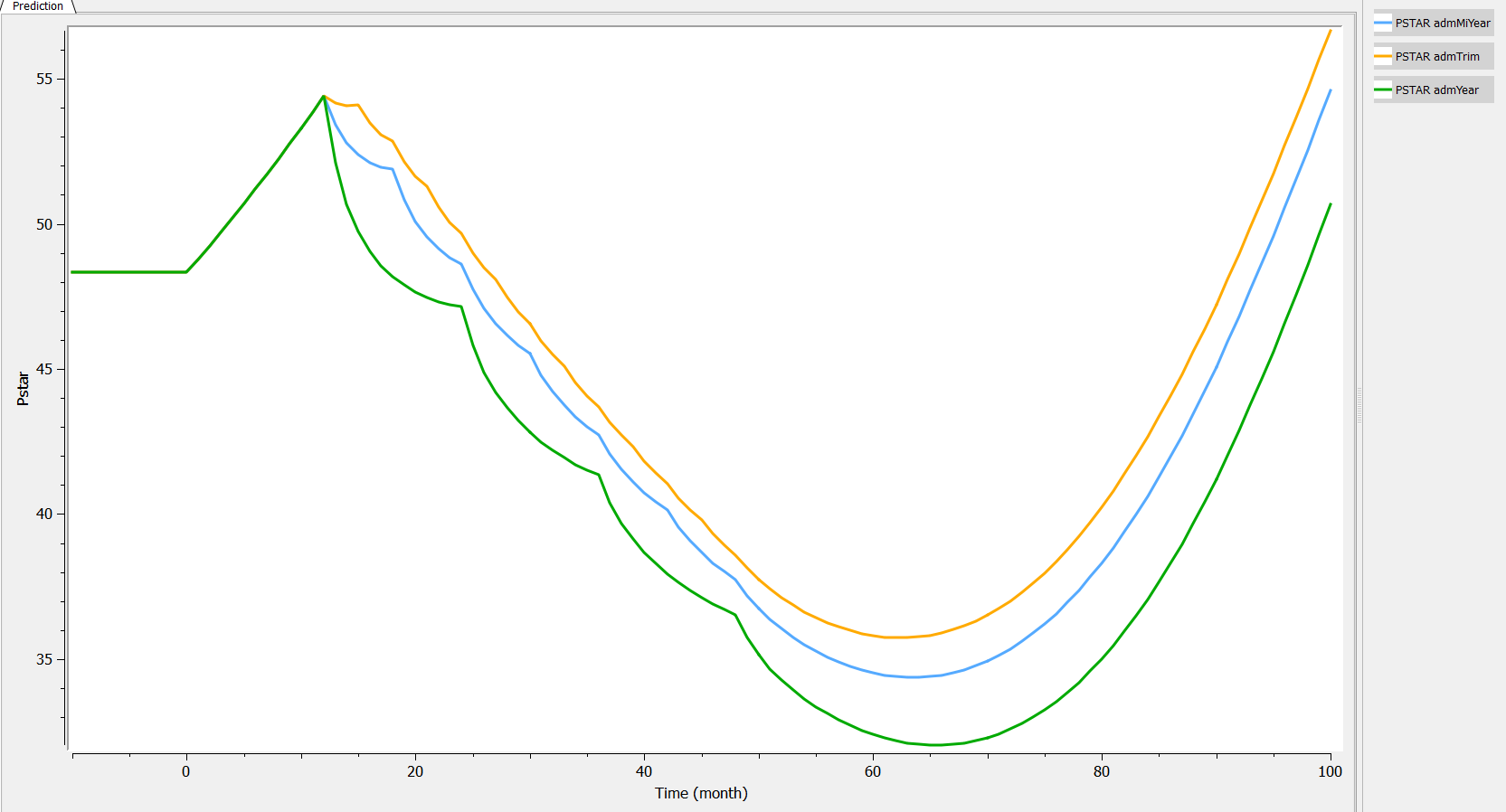 Then, if one wants to explore the impact on the inter-individual variability, one can click on iiv leading to the following figure: 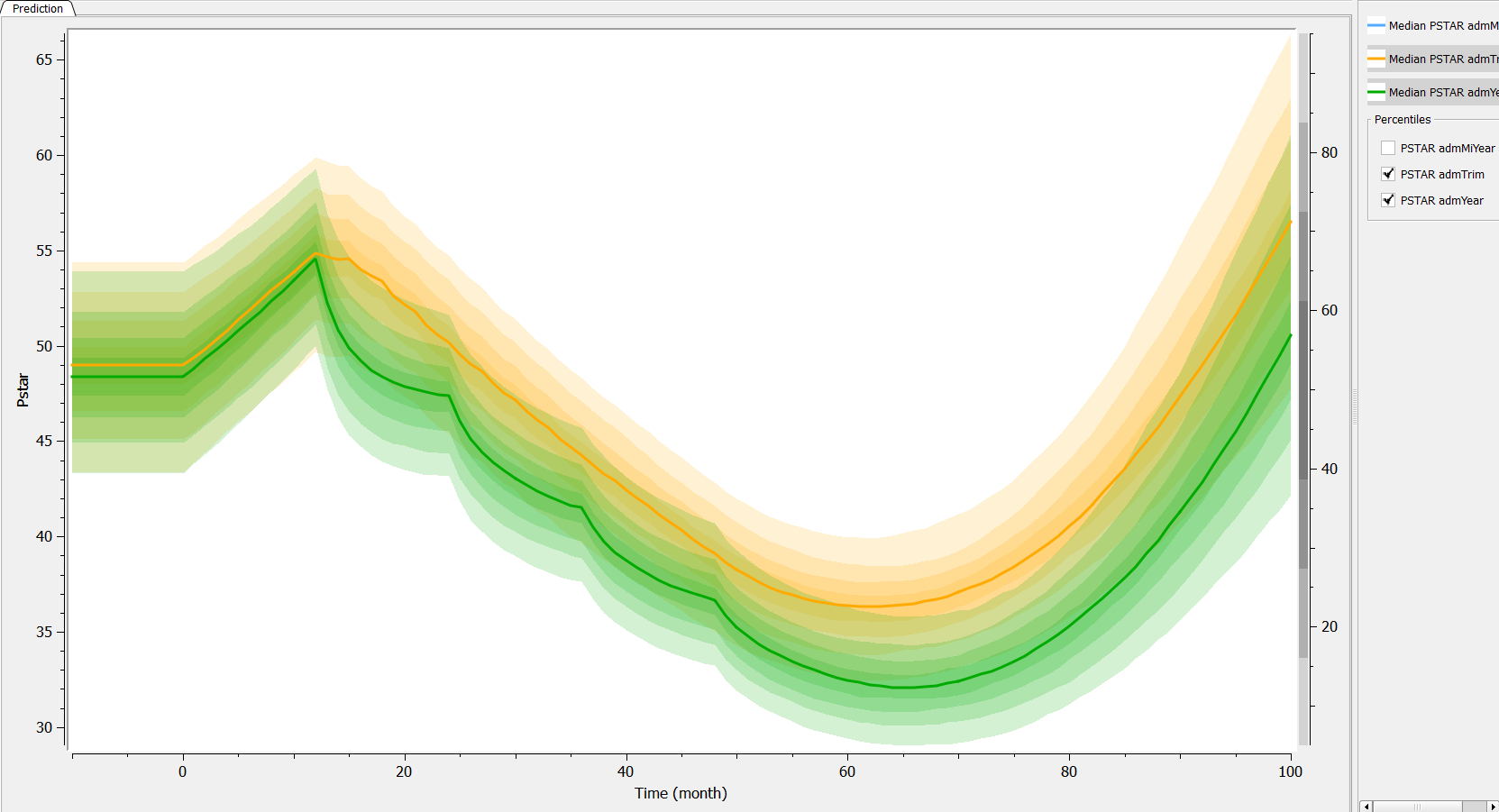 In this example, a relatively complex ODE model has been implemented in Mlxtran, and its behavior (predictions following different treatments, as well as inter-individual variability) as been explored with Mlxplore.