Rheumatoid arthritis (RA) is an immune-mediated inflammatory disease and is characterized by a chronic inflammation and synovial hyperplasia leading to the destruction of cartilage and bone. Approximately one percent of the world-wide population suffers from RA. The model is presented in a poster published at PAGE in 2011 by Gilbert Koch. The research goal is to develop a multi response model to describe the time course of the total arthritic score and the strongly delayed ankylosis score measured in collagen induced arthritic (CIA) mice. The authors used a three compartment delay differential equation model to get a deeper understanding between cytokine level, inflammation and bone destruction.

A multi-response model for rheumatoid arthritis

The modeling part was done in three steps. We will follow the steps presented by Koch in his PhD thesis.

) drives the disease. Its kinetics is described by:

) of the anti-GM-CSF antibody concentration (

) on the cytokine GM-CSF  level

. The effect of the antibody is described by the following expression:

The concentration of the anti-body is described by a 2 compartment model with bolus administration and linear elimination.

Modeling Step 2: Multi-response approach to model the TAS and AKS
The mathematical model of the arthritic disease is split into an inflammatory part

and an ankylosis (bone and cartialge destruction) part

, which corresponds to the experimentally measured total arthritic score (TAS). In addition a second response function is defined as

which corresponds to the ankylosis score (AKS).
To build a model for the time course of the inflammation

, the concept of lifespan modeling is introduced: the overall inflammation

is controlled by two processes, the inflow

. Assuming that the inflammation caused by these processes remains a certain time period

and is driven by the amount of GM-CSF, one obtains

is a first order rate constant. Then the total balance equation for the inflammation reads:

Similarly, for the ankylosis

leads to the equation:

reflects that the inflammation and the ankylosis are driven by GM-CSF. Moreover, the action of GM-CSF on the ankylosis is delayed by

. A schematic view of the model, proposed in Koch’s PhD thesis, is given here:

The purpose here is to define the model in Mlxtran language. The system writes as a PKPD model with a DDE. The resulting set of parameters is (alpha, beta, CL, V1, V2) for the PK model, (sigma1, sigma2, sigma3) for the effect model, and (k1, k2, k3, k4, k5, tau) for the RA model along with 3 additional initial conditions (I0, a,b). Therefore, the [LONGITUDINAL] subsection starts with:

. One continues with the PKPD model:

and the ODE/DDE equations along with the definition of the TAS and the AKS:

Finally, the individual parameters representing the variability of the delay are defined as a normal distribution and one writes:

The model is then the sum of all this code and is implemented in arthritisModel_mlxt.txt

To define the project, one must define the model (done in the previous paragraph, section <MODEL>), the parameter values (section <PARAMETER>) and the output (section <OUTPUT>). To explore the model, we define in the section <DESIGN> three administrations where we vary the amount of antibody.

Finally, a section is added to define the graphics we want to look at. The project is implemented in arthritisModel_mlxplore.txt as follows

First we can explore the predictions following the 3 different treatments: 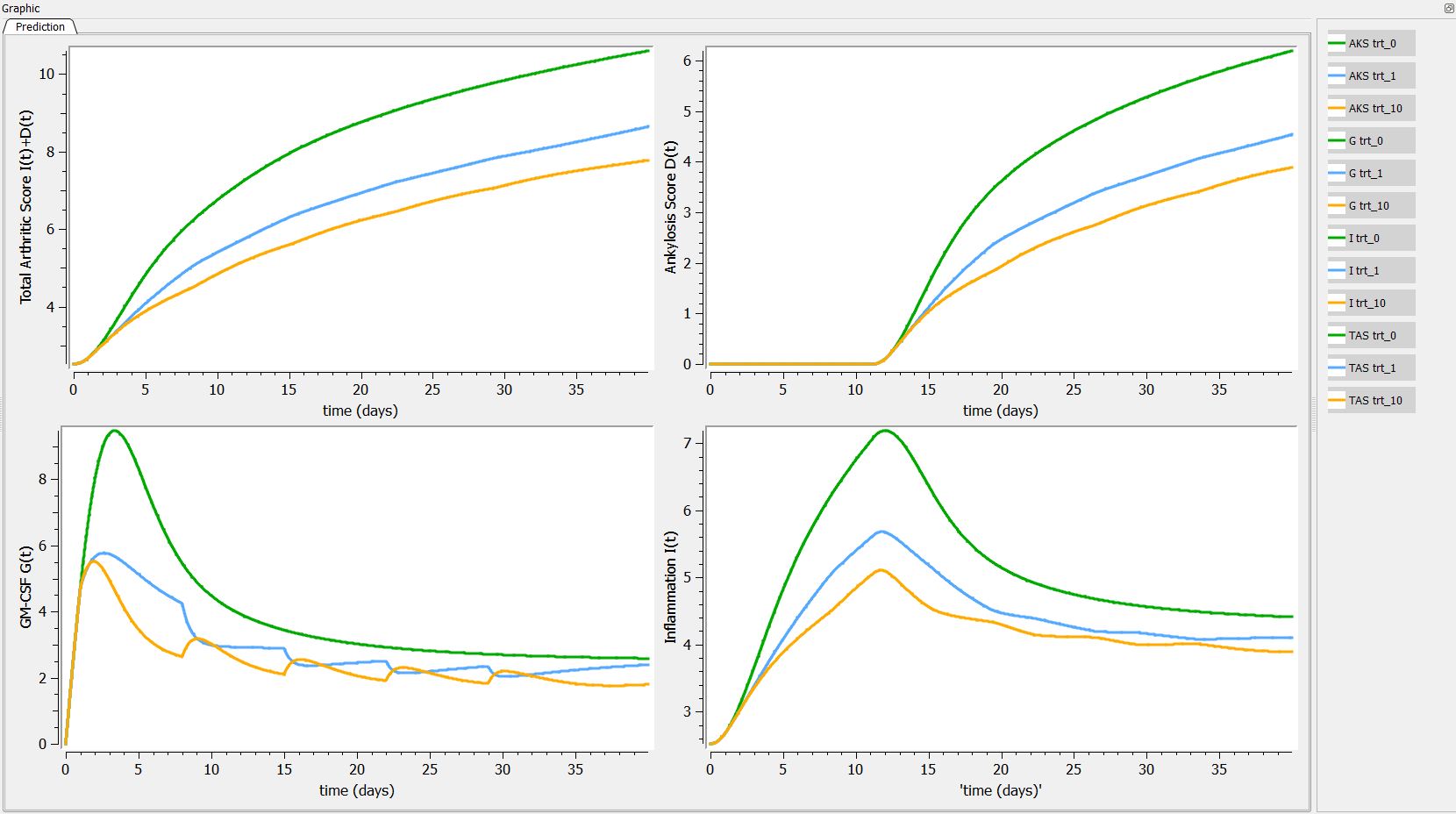 Then, if one want to explore the impact on the inter-individual variability on the delay, one can click on iiv leading to the following figure: 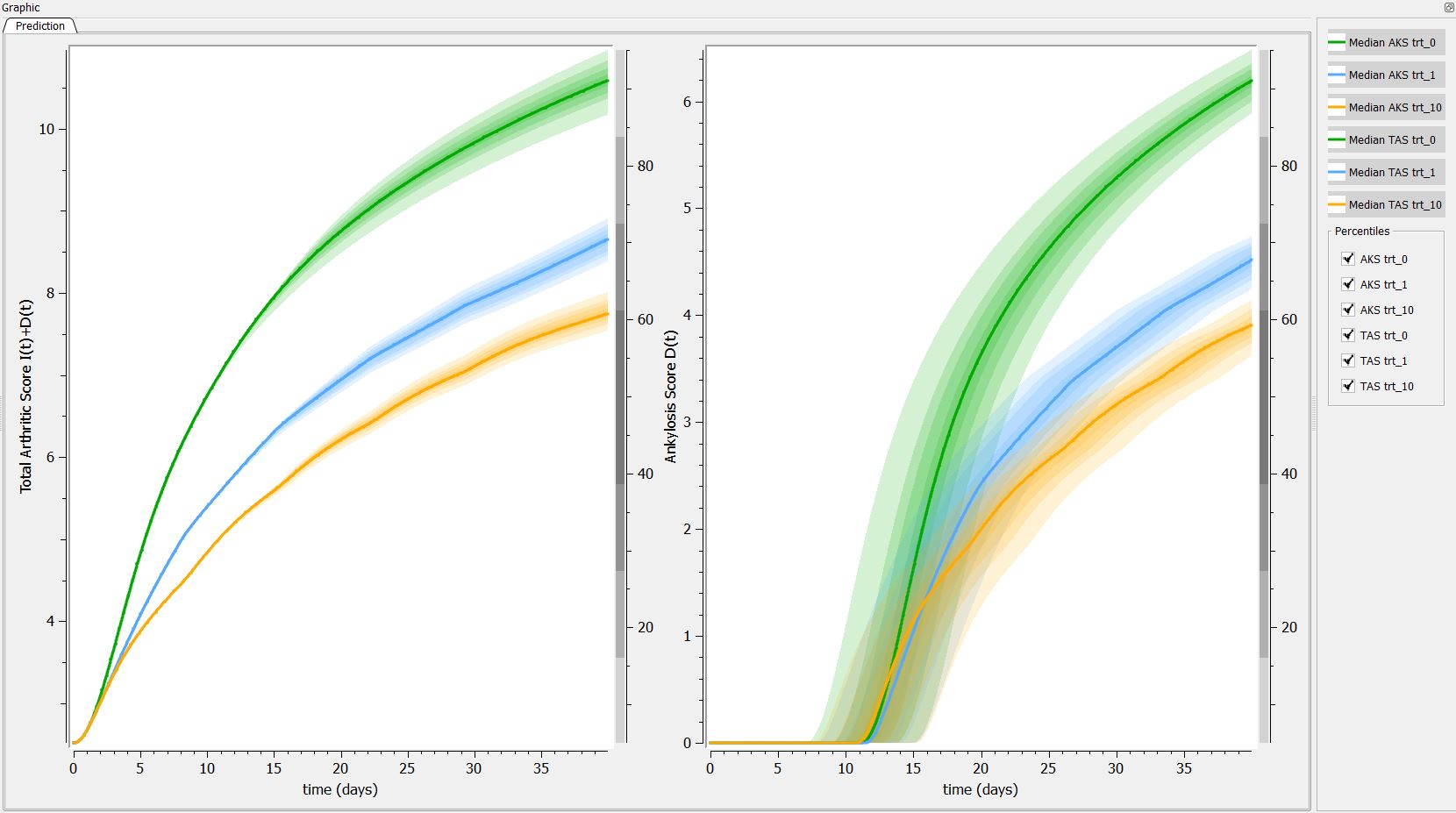 In this example, we have implemented a model with ODEs, and DDEs with complex initial conditions using Mlxtran. Using Mlxplore, we have explored the influence of different treatments on the predictions. Mlxplore also enables to visualize the inter-individual variability.