The purpose of this case study is to explore the homeostasis of glucose and insulin plasma concentrations after glucose or carbohydrate uptake.

To simulate these clinical tests, a physiologically-based glucose-insulin model has been developed for healthy humans in:

We use this model for this case study.

Plasma glucose levels are tightly regulated by the human body to ensure a constant delivery of this energy source to all tissues. After a meal, the increased glucose supply from the ingested food must be counterbalanced by an uptake of glucose by the liver for storage. On the opposite, during fast, the liver releases glucose. Glucose metabolism is tightly linked to insulin metabolism. Insulin is produced by the pancreatic cells when plasma glucose levels are high to promote glucose uptake by muscles and other organs. Other hormones are also involved in glucose homeostasis: incretins are released in the gut after glucose ingestion and stimulate insulin production. On the other hand, glucagon is produced when glucose levels are low and promotes the release of glucose from the liver.

To capture the human body physiology and the different sites of production and consumption of glucose and insulin a physiologically-based (PB) approach has been undertaken.  In a PB model, the main organs are represented by well-stirred compartments connected via blood flow rates. This permits to easily model different kinds of perturbations as there is a close to 1-to-1 mapping between the human body parts and the model. Organ volumes and blood flow rates are well-known fro the human body, while parameters related to the metabolism in the various organs must be estimated from data or literature.

In the Alvehag et al. model, glucose and the three hormones (insulin, incretins and glucagon) were included as inter-connected submodels. The scheme below (from Alvehag et al.) summarizes the number of equations in each submodel and the submodel interconnections. In total, the model encompasses 28 equations, partly non-linear.

The glucose PB submodel is composed of the main organs involved in glucose metabolism: brain, pancreas, gut, liver, kidney, periphery (such as muscles) and heart and lungs. The scheme below (from Alvehag et al.) gives an overview of the model. The interconnection to the insulin submodel is highlighted in yellow and that to the glucagon model in blue. The details are given in Alvehag et al.

The insulin submodel is composed of the same organs as the glucose submodel. The scheme and equations are given below. The connection to the glucose model is in orange and to the incretins model in green.

For glucagon and incretins only one compartment is considered, representing the entire body.

The glucose tolerance tests are modeled in the following way:

How to write it in Mlxtran

The model consists of a set of 28 ODEs which will be described in the [LONGITUDINAL] subsection. The model inputs, i.e the parameters that we want to explore, are indicated first. The model contains a large number of parameters, most of them represent organs volumes and blood flows, which value is fixed and not relevant to change. They are directly written in the model. On the opposite the parameters related to the oral absorption of glucose are interesting to explore, as well as the initial steady-state concentrations of glucose and insulin. In addition, we will also add the basal glucose uptake rate by peripheral organs (such as muscles) as parameter, to investigate the effect of physical exercise. We thus write:

with the following definitions:

In the PK: block, we define which entities will receive the glucose inputs via the depot macro. The three tolerance tests will be modeled by three different administration, each having an identifier adm. For the IVGTT, the identifier is 1 (adm=1) and the glucose amount injected is added on the amount of glucose in the blood AGH (target=AGH). For the OGTT and MGTT, the glucose ingested in added to the amount of glucose in the stomach Gs2 and Gs3. In addition, the rate of ingested glucose triggers the production of incretins in the gut (IncG) at a rate 0.9% slower than glucose uptake rate. This is captured with the p= parameter.

In the following EQUATION: block, the fixed parameter values and ODEs are defined. For instance for the amount of glucose in the heart, we write:

To define the inter-individual variability, we add a section [INDIVIDUAL], which describes the distribution of the basal plasma glucose concentration within the population:

The inputs are the population parameters Glu_pop, omega_Glu, Ins_pop and omega_Ins. The output are the individual parameters basal_glu and basal_ins, which are then used as input of the [LONGITUDINAL] section.

The code for the full model is given in the file glucose_insulin_model.txt

To define the project, we must define the model (via the path to the model file, given in the <MODEL> section), a typical value for the input parameters values (in the <PARAMETER> section) and output to display (name and time grid, in the <OUTPUT> section) and the administrations corresponding to the three glucose tolerance tests that we would like to simulate (in the <DESIGN> section).

After having loaded the project file in Mlxplore, and compiled using the blue arrow, the model can be explored.

According to the specifications, given in the <RESULT> section, the graphics display the plasma glucose and insulin concentrations, fro the three glucose tolerance tests. In the figure below, the intravenous glucose test is in orange, the oral glucose in blue and the mixed meal in green. In case of an oral ingestion, the glucose concentration in the blood rises progressively. For the same total amount of glucose, the appearance of glucose in the blood is slower in the case of a mixed meal, compared to a glucose solution: 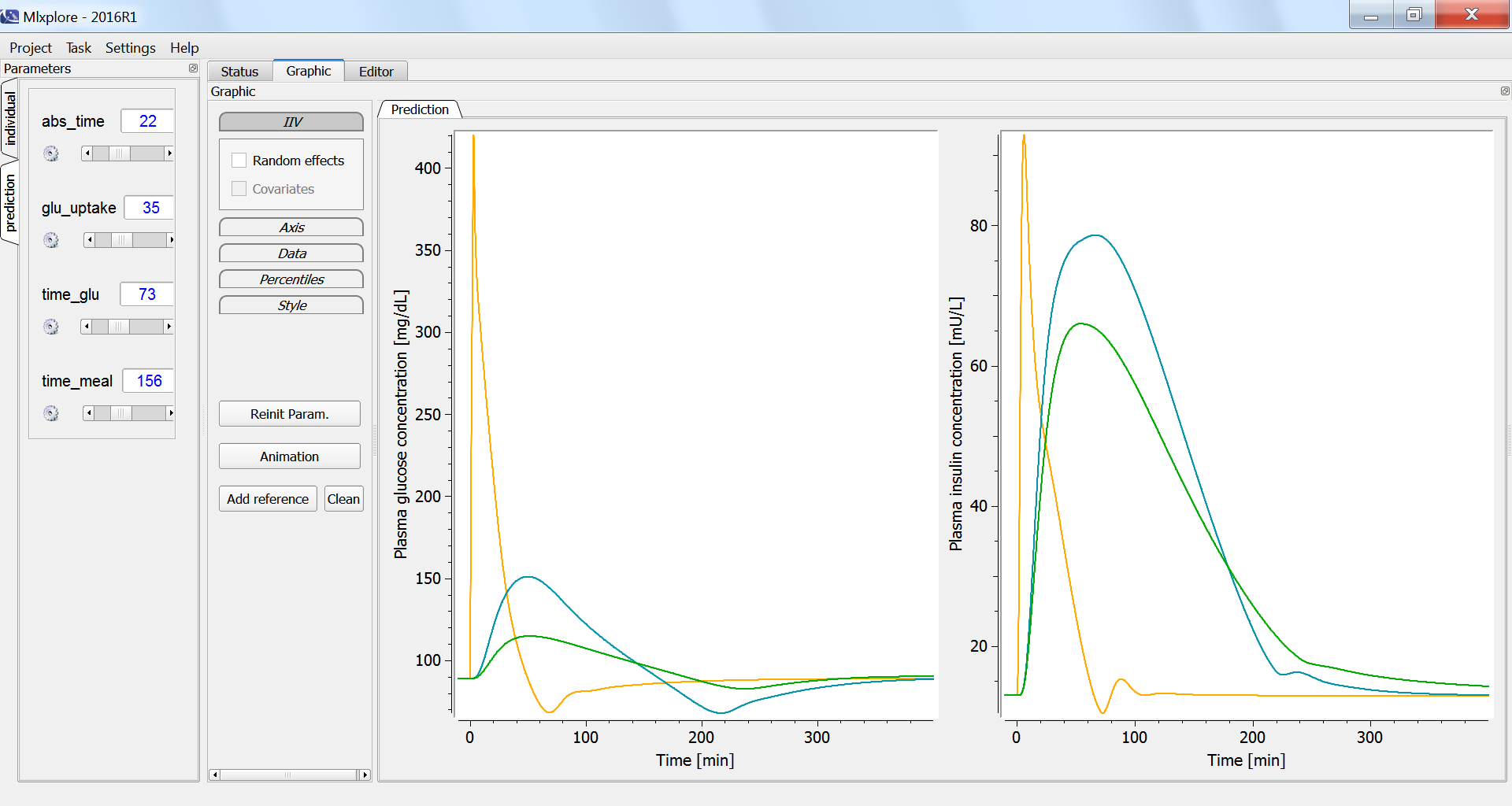 The influence of having a faster or slower characteristic time of absorption of glucose from the intestine into the blood (parameter abs_time) can be explored using the parameter slider: 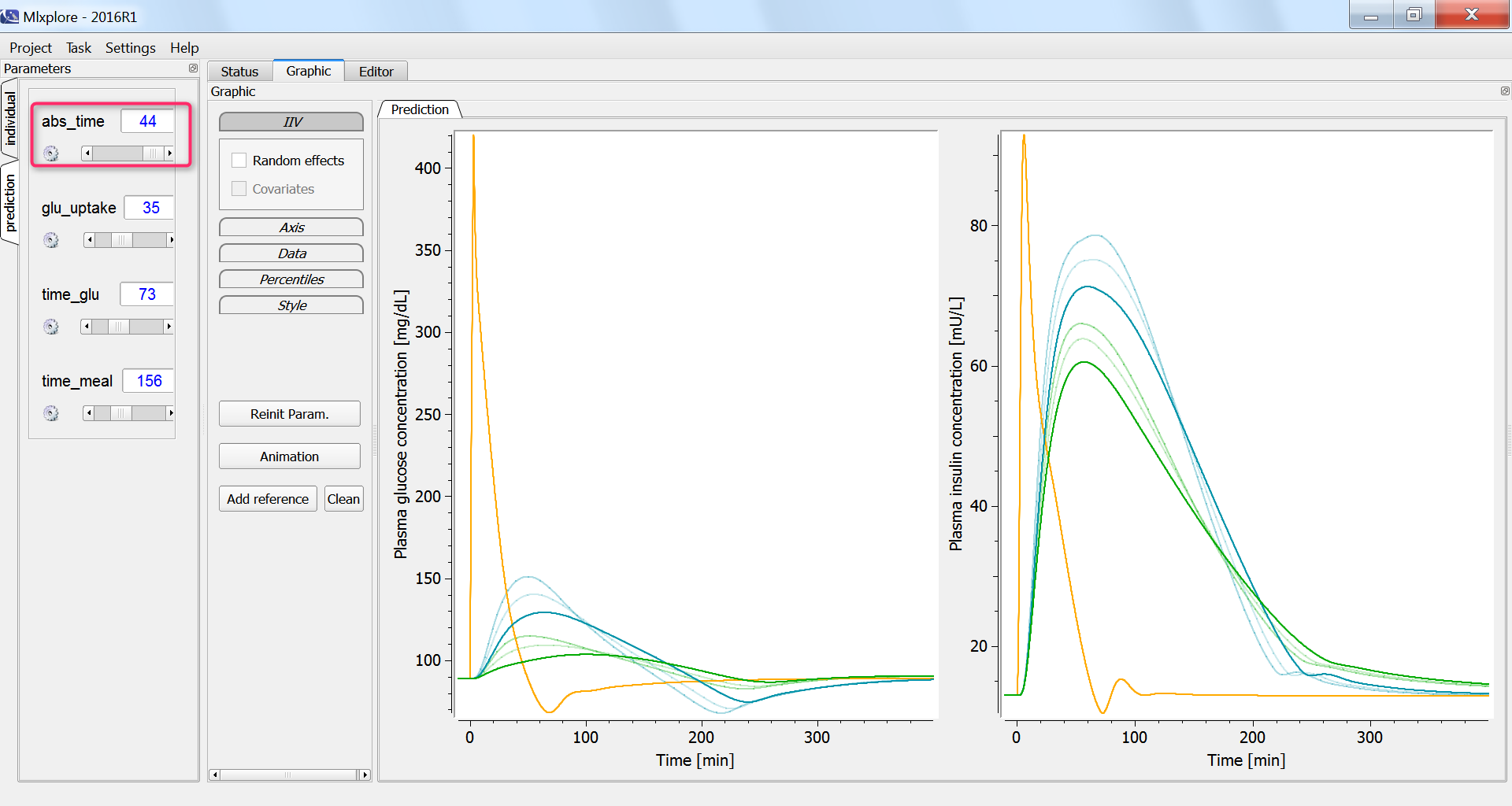 In the graphics, we can use the “animation” button to see how glucose and insulin evolve over time. The hysteresis appears clearly, with first the rise of glucose and then that of insulin: 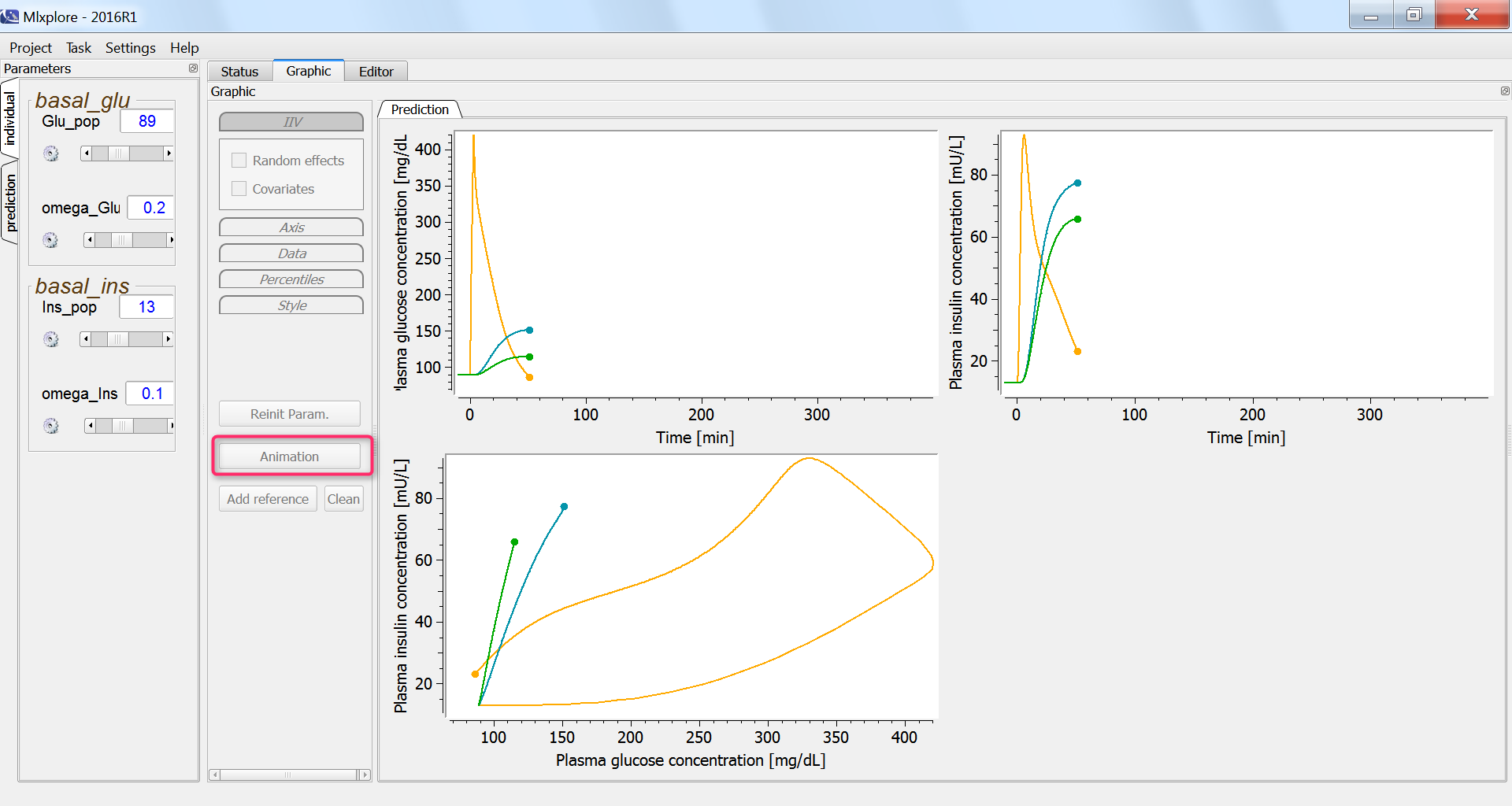 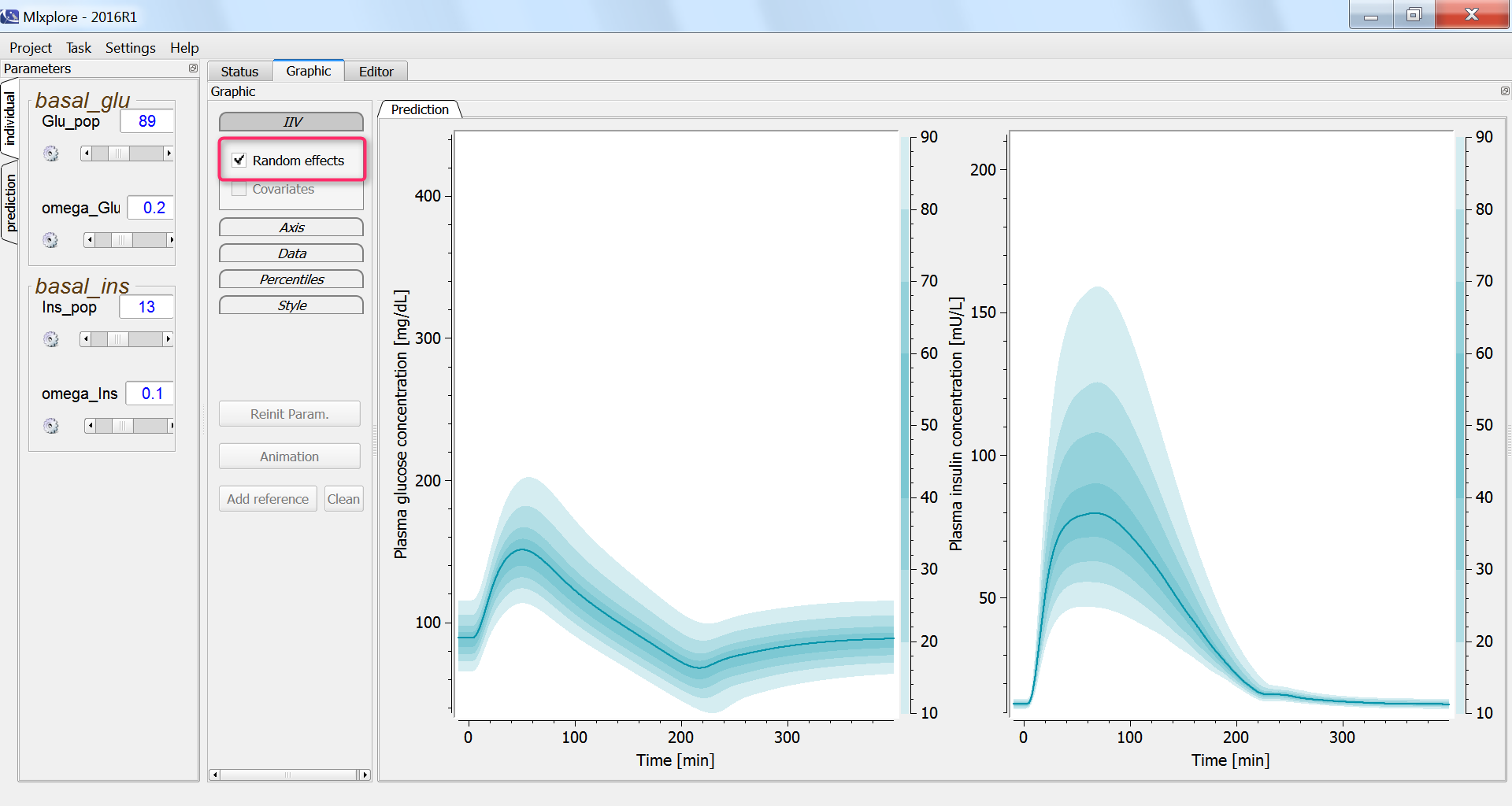 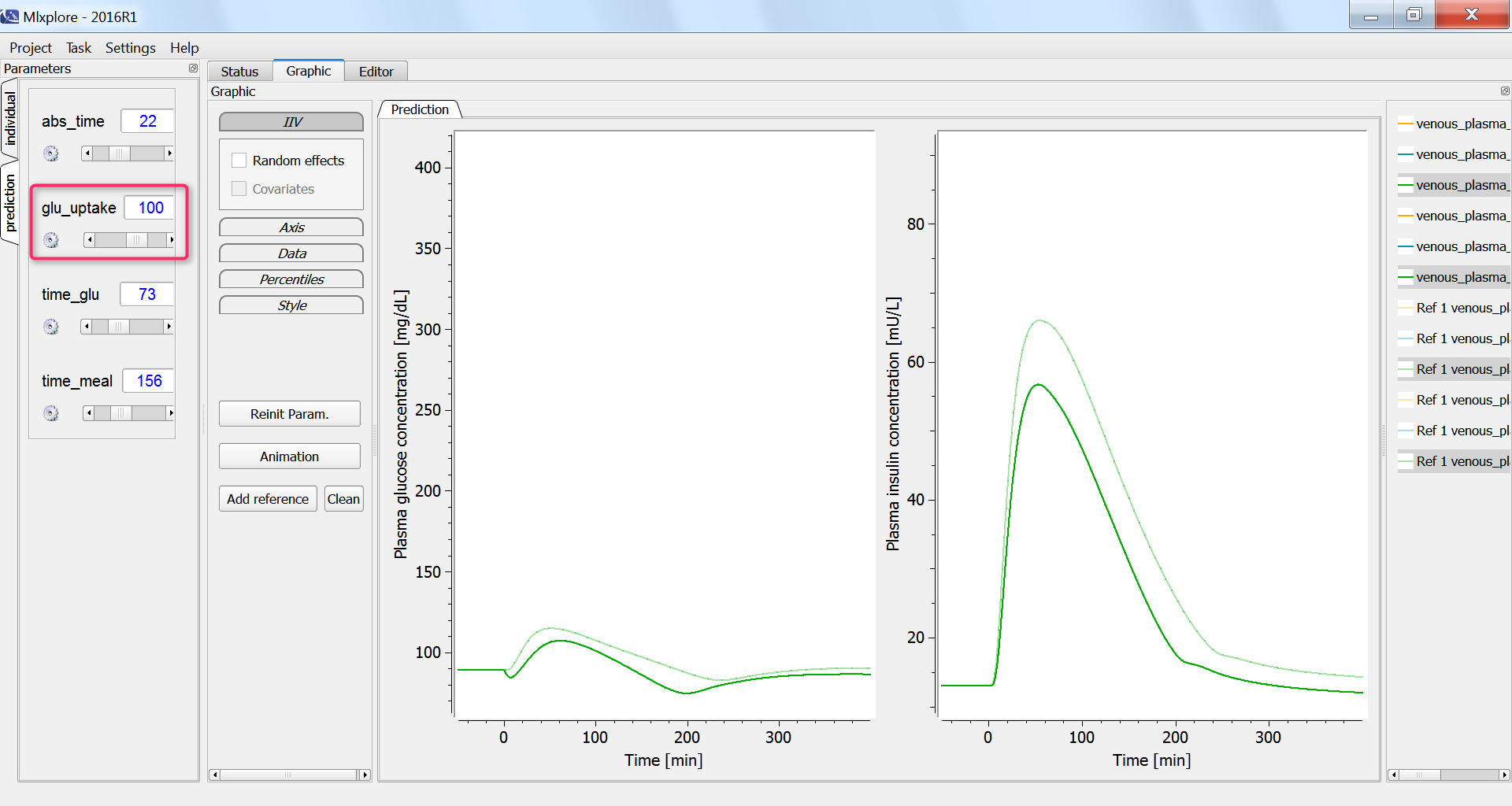 In this example a complex ODE-based PBPK model with 4 entities and 28 equations has been implemented. The real-time simulations permit to interactively explore the model behavior, even for large models.

The Mlxplore project and model file can be downloaded here.